7 Ways to Know you are being Cheated On

Dating Psychology Member
Off
affairs, being cheated on, catching her in the act, cheating signs, dating sites for cheaters, infidelity 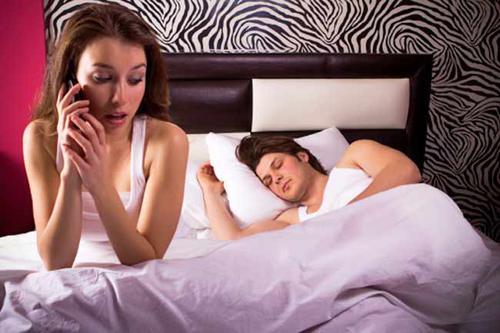 Would you be able to recognize the signs your lover is infedelitous?

She doesn’t have time for you, but her schedule is wide open for “friends.” It could be that she values her relationship with them more than the union that the two of you share. There is also the possibility that she is an infidel. Here are seven ways for you to know if your girl is cheating.

Conversations are now between you, her and whoever she is texting. She’s constantly messaging a “friend” who changes by the minute. One minute the other person on the line is Sally, and the next moment she’s talking to Amber. While it may be true that your girl is just popular, it could also be a fact that she is talking with Sam and Adam while conversing with you.

Your flame may not have anything to do with her lack of enthusiasm regarding sex. If your girl is “too tired” to enjoy intimacy after a long and hard day of work, it may be that she is getting action from someone else. Of course, your partner could be exhausted from a day of work, which is why you should study her pattern before accusing her of being a cheater. One night of no sex does not equal infidelity. Several weeks of no action in bed with the same excuse deserves an investigation.

Her social calendar is ridiculous

She has no time for you but plenty of time for her “friends.” While it could be that her priority is friendship instead of intimate relationship, her absence could also be a sign that she has other interests regarding affection. Perhaps you should be forthcoming and ask her what her plans for the relationship are, instead of sticking around and being hurt, when such behavior becomes a habit.

She questions you about your whereabouts

It is so typical of women to get suspicious of their boyfriends when they are the ones cheating. When she starts questioning your every waking moment and snooping around your phone, look out. While it could be that she has genuine trust issues, such activity could also be a sign of her infidelity. Such may particularly be the case if she suddenly finds the need to scroll through your contacts or eavesdrop on your phone calls. She is probably trying to find a way to justify her unfaithfulness.

A new outfit comes in the house almost every day

She may say that it’s from her savings or a big bonus at work, but you know different. If your girl bought clothes in moderation before and is now spending like there is no tomorrow, then there may be someone else in the picture that she is trying to impress. Who knows? He may even be the one buying her all of those extravagant gifts.

You can’t get in touch with her throughout the day

There is no need to be alarmed if her job is demanding to the point of her not being able to talk on the phone for most of the day. In actuality, her “occupied” status is a good thing as it shows you that she’s going places. The idea here, though, has to do with those large chunks of space after work in which she is unreachable, and you have no clue as to where she may be. You may want to do more than shrug off the disconnection as bad timing if such behavior is an ongoing thing. She just may be with another man during these times.

She expresses her discontent with the relationship

She may not come out and say it, or she just may, but she will make subtle comments about how unhappy she is in the relationship. “Sometimes I wonder what my life would be like if we had never met,” is a significant implication that she wants out of the relationship and has possibly already made her exit. “Different time, different era,” is another phrase that women use when describing their disappointment in a situation or person.

In all instances of potential infidelity, you should be upfront. She may not be forthcoming with you, but you should make it a point to ask for an honest response to the question, “Are you seeing someone else?” Don’t just assume that your girl is unfaithful just because she doesn’t have time for activities or walks in the house with a new pair of jeans. Instead, ask her if she feels the relationship has reached a stalemate and proceed based on the answer that she gives.

What are the cheating dating sites she might have used?

If you think she is cheating on you for sure she is on a dating site. But which one? You can find the most popular one by taking a look at those lists:

The Best Ways to Make Your New Relationship Last

The Best Ways to Bounce Back After a Breakup

3 Ways to Bring Spontaneity Back into Your Relationship

Surefire Ways To Get a Lady Off

5 Ways To Make Your Lady Happy In The Bedroom

Simple Ways to Spice Up Your Sex Routine