The office affair is something that’s just never going to work. Unsurprisingly, people have been trying it since the dawn of time. You’re there with them all the time, you see them, you have an opportunity to feel like you know each other really well. Work is hard, or boring, and it’s natural to spend some time fantasizing. The second you turn those fantasies into a roll in the hay you set yourself up to lose everything. If you won’t be persuaded here, check out this guide on how to date a coworker. 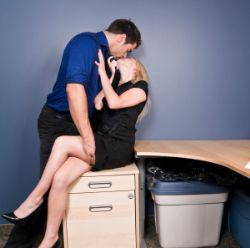 1. Your Partner Will Have to Meet Them Eventually

Your partner is going to have to meet your coworkers eventually. You can’t bring someone you love to your office party or have them drop off your lunch at work one day without them running into the person you’ve been bumping uglies with. Having an affair at work is just going to leave you looking over your shoulder constantly, worrying about how weird it’s going to be if your lover meets them.

2. You Could Get Fired If You’re Caught

Most places of business don’t support employees hooking up on company time. If you get caught hooking up (either literally caught in the act or just discovered at another time) you could lose your job. If you lose your job this way it’s all but impossible to get another one; everyone’s going to want to know why you were fired, and what are you going to say?

3. They’ll Have Something over You

You can’t assume that the hottie from work is always going to do what’s best for you. If you’re hooking up with someone, they have something over you now. They could go to the boss and say that you pressured them, or that they didn’t know what to do when you threw yourself at them. You don’t want to put your job on the line just to engage in a little fun sex. Is it worth trusting someone else with the fate of your job? They could throw you under the bus at any time and your career might not recover.

4. If It Doesn’t Work You’ll Still Have to See Them

5. It’s Only Exciting Because It’s Forbidden

Most office romances happen between people who would never date if they weren’t coworkers. Think about it. It’s only exciting because you’re not allowed to be with them. It’s the same reason why people like first date sex; for more on that, check out this article.